At presentations and workshops, I am often asked to recommend tools for authoring mobile learning. I do not recommend any tools, but do encourage them to check with their current authoring tool vendor to see what their plans are for mobile, as many vendors are moving in this direction.

Recently I have gathered information on the current tools and have compiled the following list. I know that I have missed some and am hoping that you will comment and add your favorite to the list:


Other Mobile Tools and Services

What did I miss? I will publish a complete listing and will attempt to keep it updated.
Posted by Judy Brown at 9:04 PM 29 comments:

Yesterday the New Media Center (NMC), along with EDUCAUSE Learning Initiative (ELI), released their 2009 Horizon Report. This 36-page annual report identifies Mobiles now with a time-to adoption of one year or less, from the two to three years identified in 2008.

“Already considered as another component of the network on many campuses, mobiles continue to evolve rapidly. New interfaces, the ability to run third-party applications, and location-awareness have all come to the mobile device in the past year, making it an ever more versatile tool that can be easily adapted to a host of tasks for learning, productivity, and social networking. For many users, broadband mobile devices like the iPhone have already begun to assume many tasks that were once the exclusive province of portable computers. ”

You can download the report here.
Posted by Judy Brown at 12:38 PM No comments: 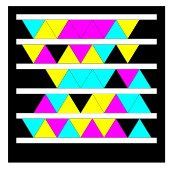 Microsoft has entered the barcode reader and creation space with their new Microsoft Tag. You can see a demo, download the reader and create tags here. The tag shown here is one that I created for my contact information and intend to include it on the back of my business card.

Microsoft has already entered into agreements with major players and it does have several advantages over the market leaders Datamatrix, EZcode and QR, but there are also some unknowns.

At CES, Tikitag was showing a RFID type tag kit including 10 tags and a USB reader development kit at $50. Because of the high cost of the tags, they indicated upcoming support for other types of 2D barcodes.

Regardless there are numerous applications for 2D barcodes in learning.

After the Holiday break, it is again conference time.
I would love to connect with any of the visitors to mLearnopedia if you are attending any of these shows. I will be there presenting and would love to have conversations about your mobile learning interests or experiences.
I am also trying to work in attending ACU’s ConnectEd Conference in Abilene, TX, February 26-27, but won't confirm for a couple weeks.
I hope to connect with you there.
Posted by Judy Brown at 7:52 PM No comments:

Last week I was at the Consumer Electronics Show in Las Vegas seeking mobile learning related tools and announcements.

The biggest mobile news in my opinion was that of the Palm Pre. The demo was very impressive and it should again move the industry, but until we get a chance to put it through its paces we will have to wait. The one thing that we know is that despite the down economy there will be new mobile devices hitting the market, each touting new improvements. We do need to make certain that our learning and performance support content will still operate on them.

If you are interested in the Palm Pre, check out the Palm site for information and the announcement video. For a good overview see Engadget’s review. 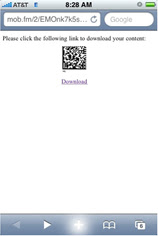 Bar codes were front and center with Nokia. Visitors were encouraged to send an SMS message with Nokia as the content to receive a link to download a 2D barcode and then bring their phone to the booth for a chance for a prize. The booth was busy. I had checked it out both with a BlackBerry Bold and the iPhone. The code was quite small, but the Nokia reader read it just fine. They certainly have improved it since last year.

BlackBerry’s booth was crowded with 3rd party apps. The arrangement of it made it very difficult to go through it systematically and make sure that you saw all the vendors.

LG showed their “Wearable Mobile Communicator” digital watch behind a glass case and did not release pricing or availability. It could be useful for SMS alerts.

MobileTV was being shown in several booths. I had planned to try it this week, but don’t have the bandwidth available.

While I was in Las Vegas I was able to use Qik on the Bold to video a few demos an interviews and was impressed with the ease of use and quality. There are so many used for this tool in education and training.

Although CES touted mobile as one of the next big things, most of their references were to automobiles and navigation or syncing. This was mainly in the North Hall where the bass speakers were blasting so loud that it was impossible to carry on a conversation.

Since mid-November we have driven over 5,500 miles escaping the snow and frigid weather. I certainly do not miss it, but have to admit to missing sitting in front of the fireplace. We are really enjoying the mobile lifestyle, but are experiencing varying levels of connectivity.
Posted by Judy Brown at 7:39 PM No comments:

A lot has been happening lately in the mobile learning arena. Some of the more important items are:

Posted by Judy Brown at 5:00 PM No comments:

I initially set up this blog over a year ago for mobile blogging, but have not used it. After several issues with an add-on Joomla blog, I have decided to move to Blogger.

For past mLearnopedia blog entries please go here.
Posted by Judy Brown at 10:01 PM No comments:

Judy Brown
Judy Brown is a Mobile Technology Analyst who has been involved in technology for learning for over 25 years and with mobile learning since 1996. She coordinates the mlearnopedia.com site. Judy recently retired as the mobile learning lead for ADL (Advanced Distributed Learning) and is working on other mobile learning initiatives.